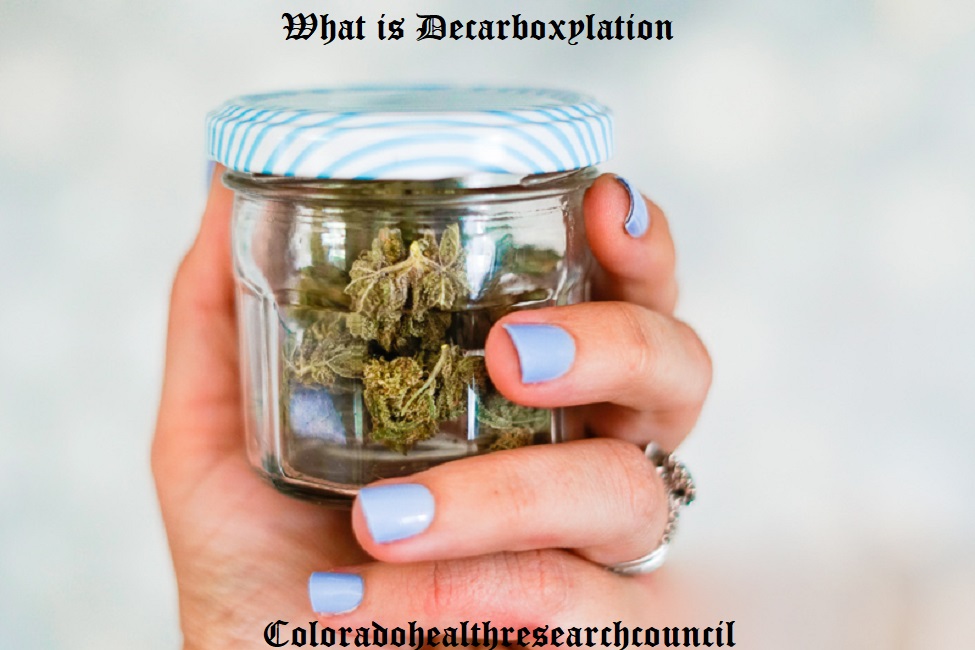 bag of raw cannabis in order to avoid getting caught with it. Eyes pop wide open and gasps ensue. “You just ate that whole bag!” somebody shouts.

However, the aftermath of this scene usually involves a very different representation of what actually happens when you consume raw cannabis. Spoiler alert: The effects will be lackluster at best. Why is this the case?

The answer to this mystery lies in a process called decarboxylation, one that is necessary for us to enjoy the psychoactive effects of the cannabinoids we consume.

If you’re wanting to make edibles or tinctures from cannabis, decarboxylation is a crucial step! Decarbing the cannabis you use in medibles and tinctures will make them safer and more effective.

Decarboxylation happens very slowly when cannabis is cured, but we can use an oven to speed up and complete the process. Decarbing your cannabis allows you to convert the THCA found in your dried buds and trim to THC. This will allow your medibles and tinctures to be more potent and take effect more quickly. Decarbing most often occurs when cannabis is smoked, so this process doesn’t have an opportunity to occur when making butters, oils and tinctures – you have to do it beforehand!

Beyond turning the THCA found in cannabis to THC, decarboxylation also has one other awesome benefit: lowering the risk of botulism in your medibles. If you don’t properly decarb your cannabis, the moisture from it can cause botulism bacteria to grow in your tinctures, butters or oils. And I’m assuming you probably don’t want that on top of why you’re medicating with cannabis already.

Decarboxylation is a chemical reaction that makes cannabis edibles feel more potent. The sciency-sounding word describes the process of turning THCA, which isn’t that psychoactive, into the THC we all know and love. Since cannabis typically contains THCA instead of THC before it’s heated or smoked, decarboxylation is essential when processing cannabis for eating. The regular cooking process typically isn’t enough to decarb cannabis fully, and it doesn’t happen naturally in your stomach.

That’s why in most recipes for cannabis edibles or tinctures, decarboxylation (or the informal verb, “decarbing”) is the first step you take.

Don’t worry, it’s simple. Decarbing simply means subjecting your weed to high temperatures (~250°F or 120°C) over about 30 minutes before using it in your recipe.

When you smoke or vaporize cannabis, the heat of the fire/vaporizer makes the decarboxylation process happen. The heat turns the THCA in your cannabis to THC, you inhale that THC and feel its effects.

When you decarb, it forces the same transformation to happen, yet leaves all that good stuff on the bud so you can eat it or cook it into something like butter or oil.

Did you know? Heat isn’t the only way decarboxylation happens. Even if you never heat your cannabis, the process of decarbing also occurs naturally over time at regular temperatures. So older cannabis is often already decarboxylated.

Why Is Decarbing Important?

Why decarb? Because decarbing is what makes edibles work! Decarboxylation could be seen as the most important step in making edibles since it’s the process that makes your weed actually feel like weed when you eat it.

It may seem counterintuitive to “cook” your weed by itself. Wouldn’t that burn off all the good stuff and make it less potent? No, it won’t reduce the potency as long as you follow the instructions in this tutorial.

In fact, it’s the opposite. If your buds are not decarbed before being eaten, you won’t feel the psychoactive effects of your weed. You could eat a whole ounce of raw bud and only be left with a breath that smells like a dispensary!

Small Pieces of Weed vs. Grinding Your Weed

There’s a bit of debate about how to prepare your bud before decarboxylation. But in our opinion, as long as you break it up a little bit there isn’t a whole lot of difference.

Breaking your weed into smaller pieces means it all gets baked a lot more evenly than if you had used whole nugs. The downside to breaking your weed up by hand as opposed to grinding is that it’s slightly more time consuming since grinding can be done with machines like a food processor.

Don’t get scared off though, it’s easy to do. If you have enough finger mobility to break up broccoli florets with your hands, you can break up your bud. It only takes a few minutes and it’s free!

A huge benefit to grinding up your weed instead of breaking it up with your hands is that you can use a machine like a food processor to do all the work for you. You just put some bud in, hold a button for a few seconds and dump out the finished product!

This is the method I typically use because it’s a bit easier to do than breaking up nugs. It’s hard to mess up because you can’t really grind your bud too small/fine. I’ve made edibles with weed ground so fine it ends up as a powder. Some growers claim that grinding the weed can cause it to lose potency, but I never noticed that in my experiments.

How To Decarboxylate Cannabis

For smokers and vapers, decarboxylation happens naturally as a result of the toking process. Although much less refined than the methods below, igniting your weed with a flame decarbs the cannabinoids and terpenes immediately, allowing you to quickly suck in and benefit from the effects. However, the excessive heat produced from this method is known to “kill off” some of these volatile molecules. Vaporizing is a bit more controlled; devices are heated up to activate THC and other cannabinoids and terpenes right around their boiling points, allowing for a nearly full dose of each compound.